With such a large area the conservation task doesn’t just fall on the Department Of Conservation but is avidly supported by the community and businesses operating here.

Those privileged enough to spend time in Fiordland find a place beyond superlatives. The Fiordland National Park occupies the south western corner of the South Island of New Zealand and with 12500 km2 is the largest of the 14 parks – the landscape is simply stunning. From dramatic peaks, sheer rock faces drop into steep slopes descending right to the water’s edge with the temperate rainforest only just clinging on. With rainfall exceeding seven metres a year in places, thundering waterfalls and cascades appear at every turn. This is a place of many moods – wind can whip the sea’s surface into a froth of funnels and swirls, but when the day is calm, mirrored reflections are nothing short of magic. And the magic does not stop at the water’s surface. Beneath the reflections of the fiords, something unusual is happening. Fresh water soaking down through the carpeted forest floor absorbs tannins, which stain it the colour of tea. On reaching the saltwater, the less dense fresh water floats on the surface, forming a tea-stained light-blocking layer. Kelps, normally the basis of marine communities, cannot grow in the light-poor conditions, and are replaced by animals which normally inhabit greater, darker depths. At the fiord entrances and along the outer coast, conditions are very different, and much more dynamic. Here kelps flourish in the turbulent water, fostering productive marine communities where rock lobster (koura) teem and paua graze the rocks. Such profound difference between the inner fi rd environment and the entrances and open coast has fundamental implications for the fish communities. Alongside Fiordland’s fish communities live some of its special inhabitants – bottlenose dolphins, New Zealand fur seals (kekeno), Fiordland crested penguins (tawaki), and blue penguins (korora). On a lucky day, you may even see whales, which swim by where the continental shelf comes close to the coast. Fiordland is the home of two very different but interconnected ecosystems – above and beyond the surface of the water. And thanks to New Zealands isolation from the rest of the world there are many unique and endemic species to be marvelled at in both cases.

The waters are home to local pods of bottlenose dolphins within Doubtful as well as Dusky Sound. At the start of summer humpback whales can be seen to travel down the West Coast on the way to their summer feeding grounds and big pods of Dusky Dolphins also feed just off the coast. Later in the summer Tuna take the same route and together with Kingfish become a common sight. New Zealand Fur Seals are found all along the coast and right into the Fiords. And I haven’t even mentioned the macro life. With so much to be explained and discovered you’re either welcome to do your homework before you come on board or let us explain things in context as we journey through the fiords. In the meantime you’re welcome to explore a little further through the documentary Mirror World.

We look forward to having you onboard with us.

Our vision is for Dusky Sound to be one of the most intact ecosystems on Earth, and New Zealand's largest ‘bio bank’ – a source of endangered native species that can be sent to pest free locations throughout the country.

To be part of the overall vision Pure Salt has initiated a project to remove rats from Indian Island/Mamaku in Dusky Sound in order to protect vulnerable native species on the Island as well as to reduce the risk of rats swimming to nearby rat-free Islands.

Our goal is reduce the rat population to undetectable levels to enable future translocations of native species and play our part in the overall restoration.

The work is done using a grid network of GoodNature A24 self re-setting traps on an approximate 100 x 100 grid across the island. Over 17km of tracklines  are cut and a network of 200 traps is established and maintained.

Book onto one of our Conservation Adventures -  your fare will go towards the project and you'll have the chance to be part of monitoring, maintenance, installation or relocations as part of the adventure.

Make a donation via the New Zealand National Parks Conservation Foundation to pay for traps and equipment. The foundation as well as ourselves will keep you in the picture about where the funds are going.

Purchase a single trap or one of the traplines directly through our store to push the project further. We'll let you know where and when it is set and how it is doing on the way to relocations. 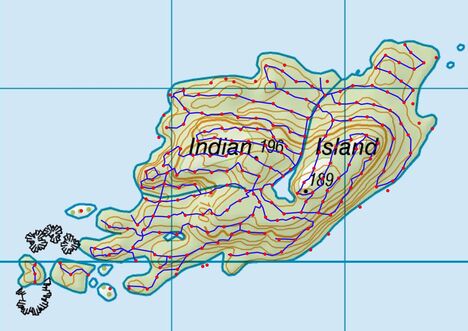